I had earlier noticed while looking at Impressionist paintings in the Musee D’Orsay that a street in our neighborhood, Batignolles, was mentioned.  However, last night while reading the Encyclopedia of Impressionism,  I happened upon a few pages devoted to Batignolles and which explains why it is the birthplace of Impressionism.

Here the a painting I saw at the Musee D’Orsay that had earlier caught my eye. It is called L’Atelier de Bazile.  It caught my eye because the address of the atelier, 9 Rue de la Condamine, is just one block over from our apartment.  Bazile rented a large studio there and entertained musicians and artists. The painting itself shows Zola, Renoir, Monet, and Manet. 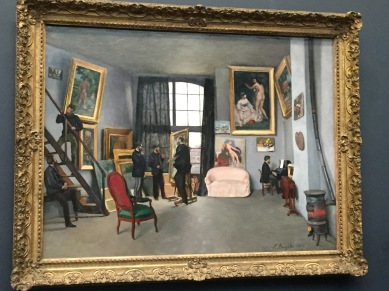 What else happened in our neighborhood?  Manet had a studio here and lived here.  Caillebotte painted the Rue de Clichy (Rue de Paris, temps de pluie),  Renoir and Bazile both lived at 9 Rue de la Condamine.

It seems overall, that it was the hangout for these artists and more.  A nearby cafe, Cafe Guerbois on what is now Rue de Clichy was the site of meetings of these artists.  Others included Sisley, Pissarro and Degas.  The name given the group was the “Batignolles Group.”

A painting? No, the view from my kitchen window. Happy doing the dishes. #paris #eiffeltower
Also tonight there is a French flag flying inside the Eiffel Tower. #eiffeltower #toureiffel #paris
Thunder and lightning tonight! #paris #eiffeltower #thunderstorm #lightening
Red peppers stuffed with lentils rice peas a few tomatoes and some herbs (rosemary oregano basil and thyme). #vegan #stuffedpeppers
Miso soup for lunch. Day 17 of staying inside. Doesn’t need many ingredients but does need miso! Lucky I had some and it lasts a long time. #vegan #stayhome #restezchezvous #iorestoacasa
Pineapple muffins made with 100% oat flour. Pushing the envelope and perfecting my baking skills using oat flour (made from my stash of organic rolled oats). #restezchezvous #restezalamaison #iorestoacasa #gluten-free #pineapplemuffin
%d bloggers like this: