One of the world’s most colorful species of duck, the Mandarin Duck, is in the Square De Batignolles! I saw one of these ducks in the duck pond at the park, and later found out how special it was!

The male Mandarin duck is hard to miss. It has flamboyant feathers all over, and has a distinct red bill. Mandarin ducks are native to Asia, so I had never seen one in real life before, and was surprised to see it in Paris, France!  In our photo, the Mandarin duck is behind the geese.   We downloaded a photo of a Mandarin duck from the web to show you what it looked like up close. 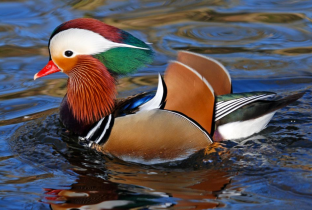 At first I only noticed this duck but then – OMG! – there were a bunch of other really cool ducks including the Canvasback duck, the Harlequin duck, the Fulvous Whistling duck (who makes a really noisy “kit-tee!” sound).

As you can see in the pictures below, the Fulvous whistling ducks have ducklings!

We also saw some ducks that we don’t know the names of. Put in the comments if you know what these ducks are called!

2 thoughts on “Fille: Worlds most colorful duck seen in Paris!”