Who eats pizza in Paris?  We do as of a few days ago.

Just so you know though, even at home in California we rarely eat pizza, perhaps once or twice a year.  Since we didn’t have a craving for it, we haven’t eaten pizza during our first five months here.

However, a new pizza place was opening on Avenue de Clichy.  Fille was excited.  I was dubious since most the pizza places we have seen (from the outside) seemed odd to me.  The pizza sits on the counter and is then warmed up in an oven.

A few nights ago the new pizza place was finally ready for customers and we checked it out.  We saw that it makes pizza to order in one of those super fast pizza ovens.  It isn’t a brick oven, but it isn’t warmed up pizza either, so it is fine by me!  A few days later we tried it. 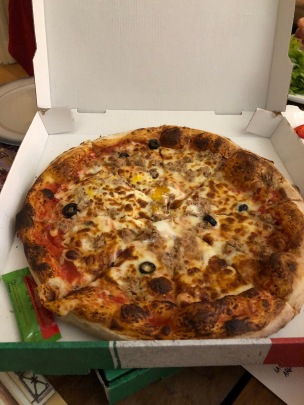 The pizza place isn’t pretentious or stuffy. I think it is part of a chain, O Five Pizza, but it is fresh and good.  Not surprisingly some of the flavor combos are distinctly french, for example, egg and tuna.  We ordered that and it was YUM!

One thought on “Maman: Pizza in Paris?”