I was excited to find out that fille’s rowing club was having a regatta.

Each boat was randomly allocated a mix of junior rowers, recreational rowers, and competitive rowers. Even the  rowers who last year won a french national championship rowed!  Everyone was amazing friendly and supportive of each other.  There was a lot of cheering and clapping! 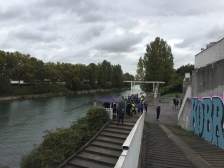 The club organizes this event at the beginning every year so that rowers from the different groups can mingle and socialize.  Their practices are at different times or different days so otherwise they don’t meet. 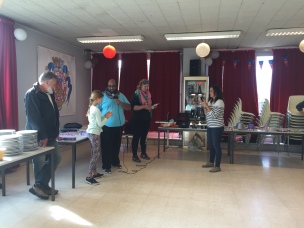 The first photo shows fille’s team getting a prize.  It’s hard to see in the photo but her team had the shortest (fille) and tallest (standing behind her) rower! The second photo shows her getting a prize for being the youngest rower. 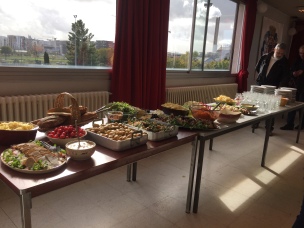 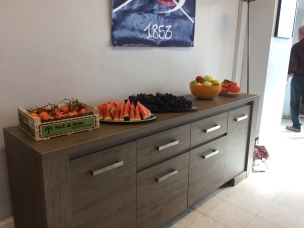 I was also excited about the lunch afterwards and wasn’t disappointed.  I wasn’t the only one excited, as another member pointed out that it was being cooked by a trained chef and predicted it would be “très délicieux”.  The french do like their food!  It was delicious and there was wine available of course.

In the evening there was a dance party with a DJ.  Alas, we didn’t go.  The regatta and lunch were enough for us.