We have been fortunate until now to avoid the huge crowds and lines that can form at Parisian tourist attractions.  September through December were great months to be here.  The weather was great and the crowds were sparse.

So, I was shocked over the Christmas and New Year’s.  I didn’t expect the crowds we encountered.  I guess I should have realized that it is an attractive destination for the holidays for those in Europe for whom Paris is close by and those in Australia for whom this time of year is the long summer school break.

The difference was dramatically noticeable over the holidays.   In the subways, there were many more tourists.  We heard Italian, German, English, Spanish with much more frequency than before and saw many more people pouring over maps.

The crowds at the Louvre were large as expected.  The line at Notre Dame was 2-3 times what it was in September and about 20 times as long as the previous non-holiday weeknight.  The security line at the Sacre Coeur was huge. The Eiffel tower is undergoing construction and there are barricades everywhere making it difficult even to cross the street.  The Place du Tertre in Montmartre was packed even on a rainy day. 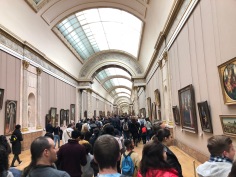 There are places without crowds though.  Bertillon (ice cream) had no crowds.   The lesser known museums had no crowds.  The line at Angelina’s wasn’t too bad. The Tuilleries garden was pretty empty.  And we had the outside top seating on the Bateaux Mouches cruise pretty much to ourselves on a slightly rainy night.